The note is just a single sheet gone yellow with age, typewritten and tightly spaced. It’s rife with typos and misspellings and sprinkled with attempts at emending them. Clearly, some effort went into perfecting the tone, that of a disappointed admirer, appalled by the discovery of “hidious [sic] abnormalities” in someone he once viewed as “a man of character.”

The word “evil” makes six appearances in the text, beginning with an accusation: “You are a colossal fraud and an evil, vicious one at that.” In the paragraphs that follow, the recipient’s alleged lovers get the worst of it. They are described as “filthy dirty evil companions” and “evil playmates,” all engaged in “dirt, filth, evil and moronic talk.” The effect is at once grotesque and hypnotic, an obsessive’s account of carnal rage and personal betrayal. “What incredible evilness,” the letter proclaims, listing off “sexual orgies,” “adulterous acts” and “immoral conduct.” Near the end, it circles back to its initial target, denouncing him as an “evil, abnormal beast.”

The unnamed author suggests intimate knowledge of his correspondent’s sex life, identifying one possible lover by name and claiming to have specific evidence about others. Another passage hints of an audiotape accompanying the letter, apparently a recording of “immoral conduct” in action. “Lend your sexually psychotic ear to the enclosure,” the letter demands. It concludes with a deadline of 34 days “before your filthy, abnormal fraudulent self is bared to the nation.”

“There is only one thing left for you to do,” the author warns vaguely in the final paragraph. “You know what it is.”

When the Rev. Dr. Martin Luther King Jr. received this letter, nearly 50 years ago, he quietly informed friends that someone wanted him to kill himself — and he thought he knew who that someone was. Despite its half-baked prose, self-conscious amateurism and other attempts at misdirection, King was certain the letter had come from the F.B.I. Its infamous director, J. Edgar Hoover, made no secret of his desire to see King discredited. A little more than a decade later, the Senate’s Church Committee on intelligence overreach confirmed King’s suspicion.

Since then, the so-called “suicide letter” has occupied a unique place in the history of American intelligence — the most notorious and embarrassing example of Hoover’s F.B.I. run amok. For several decades, however, only significantly redacted copies of the letter were available for public scrutiny. This summer, while researching a biography of Hoover, I was surprised to find a full, uncensored version of the letter tucked away in a reprocessed set of his official and confidential files at the National Archives. The uncovered passages contain explicit allegations about King’s sex life, rendered in the racially charged language of the Jim Crow era. Looking past the viciousness of the accusations, the letter offers a potent warning for readers today about the danger of domestic surveillance in an age with less reserved mass media.

The F.B.I.'s entanglement with King began not as an inquiry into his sex life but as a “national security” matter, one step removed from King himself. In 1961, the bureau learned that a former Communist Party insider named Stanley Levison had become King’s closest white adviser, serving him as a ghostwriter and fund-raiser. The following year, Attorney General Robert Kennedy approved wiretaps on Levison’s home and office, and the White House advised King to drop his Communist friend. But thanks to their surveillance, the bureau quickly learned that King was still speaking with Levison. Around the same time, King began to criticize bureau practices in the South, accusing Hoover of failing to enforce civil rights law and of indulging the racist practices of Southern policemen. 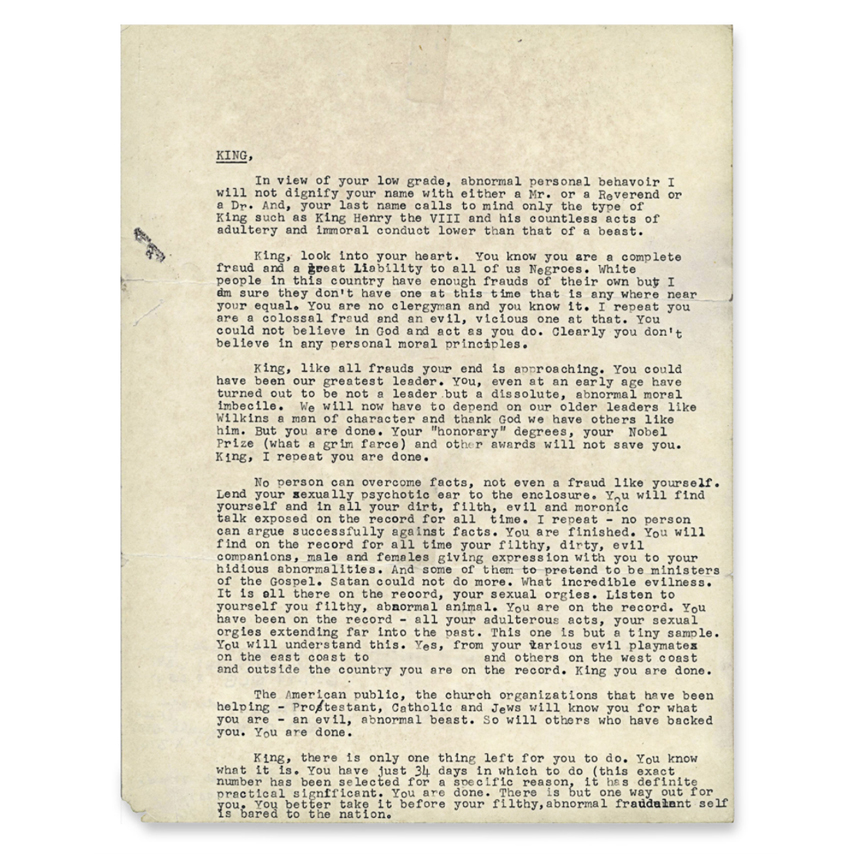 ‘You Are Done’: The letter sent to King by the F.B.I. (One person’s name has been obscured because The Times could not verify or disprove the claims about her.)CreditNational Archives, College Park, Maryland

This combination of events set Hoover and King on a collision course. In the fall of 1963, just after the March on Washington, the F.B.I. extended its surveillance from Levison and other associates to King himself, planting wiretaps in King’s home and offices and bugs in his hotel rooms. Hoover found out very little about any Communist subterfuge, but he did begin to learn about King’s extramarital sex life, already an open secret within the civil rights movement’s leadership.

Hoover and the Feds seem to have been genuinely shocked by King’s behavior. Here was a minister, the leader of a moral movement, acting like “a tom cat with obsessive degenerate sexual urges,” Hoover wrote on one memo. In response, F.B.I. officials began to peddle information about King’s hotel-room activities to friendly members of the press, hoping to discredit the civil rights leader. To their astonishment, the story went nowhere. If anything, as the F.B.I. learned more about his sexual adventures, King only seemed to be gaining in public stature. In 1964, the Civil Rights Act passed Congress, and just a few months later King became the youngest man ever to be awarded the Nobel Peace Prize.

At this point Hoover decided to escalate his campaign. On Nov. 18, 1964 — 50 years ago this week — Hoover denounced King at a Washington news conference, labeling him the “the most notorious liar in the country.” A few days later, one of Hoover’s deputies, William Sullivan, apparently took it upon himself to write the anonymous letter and sent an agent to Miami, to mail the package to Atlanta.

Even now, looking at a full copy of the letter, it’s tough to puzzle out just what the bureau wanted King to do. The largest unredacted section focuses on King’s sex life, recounting in graphic language what the bureau believed it knew. Another uncovered portion of the note praises “older leaders” like the N.A.A.C.P. executive director Roy Wilkins, urging King to step aside and let other men lead the civil rights movement. And some maintain that they simply meant to push King out, not induce suicide.

Whatever it was the F.B.I. hoped King would do, they probably preferred it to happen before the Nobel ceremony, scheduled for mid-December. But King did not even see the package until after his trip to Oslo. According to his biographer David Garrow, it was King’s wife, Coretta, who first opened it, expecting to find a recording of one of her husband’s speeches. She turned the contents over to King, who assembled a group of confidants to sort out a response. As King’s closest friends and associates recalled, everyone immediately agreed the letter could only be the work of one institution: Hoover’s F.B.I.

Today it is almost impossible to imagine the press refusing a juicy story. To a scandal-hungry media, the bedroom practices of our public officials and moral leaders are usually fair game. And a sex scandal is often — though not always — a cheap one-way ticket out of public life. Faced with today’s political environment, perhaps King would have made different decisions in his personal affairs. Perhaps, though, he never would have had the chance to emerge as the public leader he ultimately became.

Luckily, in 1964 the media were far more cautious. One oddity of Hoover’s campaign against King is that it mostly flopped, and the F.B.I. never succeeded in seriously damaging King’s public image. Half a century later, we look upon King as a model of moral courage and human dignity. Hoover, by contrast, has become almost universally reviled. In this context, perhaps the most surprising aspect of their story is not what the F.B.I. attempted, but what it failed to do.

The current F.B.I. director, James Comey, keeps a copy of the King wiretap request on his desk as a reminder of the bureau’s capacity to do wrong. But elsewhere in Washington, the debate over how much the government should know about our private lives has never been more heated: Should intelligence agencies be able to sweep our email, read our texts, track our phone calls, locate us by GPS? Much of the conversation swirls around the possibility that agencies like the N.S.A. or the F.B.I. will use such information not to serve national security but to carry out personal and political vendettas. King’s experience reminds us that these are far from idle fears, conjured in the fevered minds of civil libertarians. They are based in the hard facts of history.

Beverly Gage is a professor of American history at Yale.